My mother sent me some snaps from a friend of hers who’d been having some trouble on their sheep property.  They’d been losing a number of them over a period of time and he assumed it was from dingo’s or even wild dogs so he put up an electric fence.

Well wasn’t he surprised when the whole thing shorted out one night and he rolled out there the next day to find this little chap caught up in the wires. What was more disconcerting [apart from the enormous size of the thing] was that it appears it had gotten itself stuck in the early hours of the morning – returning from raiding the sheep as you can by the bulge in the belly. 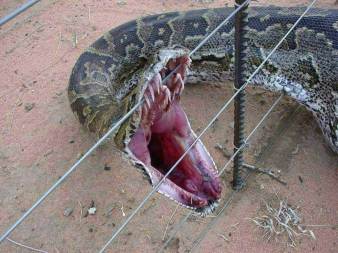 Now most think of the python as a fairly harmless, albeit enormous, snake that you just steer clear of and let go about its business.  Lot’s of people even speak of the relative ease of getting away but those that do are not up on bush python physiology otherwise they’d know about the rather large teeth used to hold their prey in place to prevent such escapes.

Just to make things interesting it was simply stuck there, not dead, despite receiving an enormous and ongoing shock from the fence [right up until it shorted out the system] and the farmer was faced with freeing it or shooting it.  Most would be surprised to learn that shooting it wasn’t really an option but freeing this little fellow was tricky as by now it was just a TAD pissed off and snipping the wires too close to the head of the snake wouldn’t have been a good idea AT ALL.  So a meter or so away he snipped the three wires and prudently headed toward the farm Ute to await the departure of our friend.

53 thoughts on “More Than A Mouthful”