I’ve written a number of pieces here at Unload and Unwind about Australia, the good, the bad and the slightly odd but this one is definitely a keeper.

Now I know Australians do have a bit of a reputation for being larkins, not to mention enjoying a brew or two but recent events in the Northern Territory set my giggle radar pinging as if I’d just discovered a pod of whales in the middle of the desert.

Well I haven’t [but wouldn’t that be nifty] but what I did find was an article about a recent prison break in one of the low security prisons in Darwin. 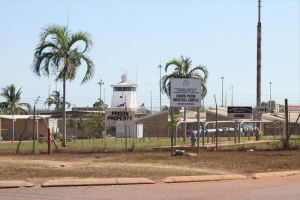 It appears inmates from the Berrimah prison have been breaking out of jail, being picked up by friends and going to have a drink THEN after all that is over they break back INTO prison so as not to be missed.  According to the ABC report:

“Authorities were believed to suspect the group, and possibly other prisoners, were from time to time jumping a cyclone fence, getting picked up from a main road by partners and given alcohol and marijuana, before breaking back into prison a few hours later.”

This practice was discovered when guards broke up a fight between five men who where:

This then led to a further search of the prison where numerous bottles of alcohol, mobile phones and some suspicious looking green leaf [we won’t call it weed] were found.  Sadly for those men who after all DID come back after breaking out it appears that this will be their last hurrah.  As punishment for their activities they have been transferred to the Maximum security prison which makes trips to the bottlo and spending Friday night on the town with mates somewhat difficult.

Cover for the album Stoneage Romeos

Still I have to take my hat off to them as I must admit their antics reminded me of breaking out of boarding school to go watch the Hoodoo Gurus play at the Uni Refectory when I was a senior.  The hardest part was never the breaking OUT it was climbing back up when on the shaky side of sober, well alright past the shaky side and tumbling fast into the vicinity of drunk.  I imagine climbing the cyclone fences in prison was hard enough but going back the same way when drunk – hat off indeed.

Just one thing concerns me though and I have to admit – it’s a biggie. The suburb of Berrimah doesn’t only have the prison there it also has Kormilda College, a private high school and one my son attended when he was at school in the Northern Territory.

So while I can laugh at the idea of breaking out of prison to go for a drink and then breaking back in I will admit it does seem to be a dangerous precedent and one I am glad is now known by the authorities.  However I must admit I do think that this would not have happened anywhere other than Australia.

16 thoughts on “Tickled on Tuesday – Only in Oz”