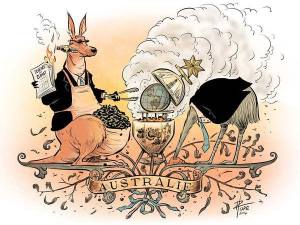 Well as I said in a previous post things have gotten somewhat interesting here in the land of Oz and not in a good way.  For a country that is supposed to pride itself about providing a ‘fair go’ for everyone we seem to be failing rather badly on a variety of fronts.  I don’t want you to think that we’ve suddenly turned into jack booted thugs overnight BUT it would be a fair assumption if you were going on nothing but current policy in regards to health, education, asylum seekers and the environment.

The past month has provided an ongoing litany of injustices being perpetrated by the current government but we have to start somewhere and as a women I think it is fair to start with the news which shows that in regards to gender and representation in government Australia is failing badly.  Recent world figures based on the current members of parliament and those serving in ministerial positions Australia has been ranked 48th in the world. 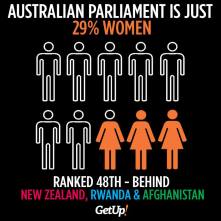 Sounds bad, well honestly it doesn’t even begin to describe how bad it could be BUT this might give you a clue – Australia ranks BEHIND Afghanistan and Rwanda for gender equality and representation in the field of government.  Now I don’t know about you but it does strike me that coming in BEHIND Afghanistan is a BAD thing overall when it comes to showing the world our position on women and gender equality.

Combine that with a Prime-minister who referred to his female candidates during election time as having sex appeal and giving them advice regarding hair and make-up it does seem that Australia has taken a little step back in time.

The next interesting thing that has occurred is that Abbott has actually managed to achieve economic unity according to The Guardian:

There’s a joke about economists: if you ask five economists the same question you’ll get six different answers. Granted, it’s not a very good joke, but it’s a fair call…….But that’s where Abbott and Hockey have achieved what many thought impossible: a true consensus. Unfortunately for the coalition government, the consensus is entirely against them.

The basis of the economic argument that drove the budget is built around three simple so-called facts.  These are 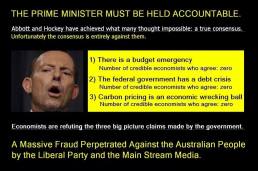 The only problem for the government is that economic world leaders, including Nobel Prize Winner Joseph Stiglitz disagree with the above reasons and have in fact publicly spoken against the current budget and refuted the basis on which it was developed.

World wide condemnation of the removal of the carbon tax doesn’t seem to have made any impact on the Abbott administration despite that fact that the majority of Australian voters are in favor of clean energy, taxing mining companies and other carbon producers as well as environmental protection.

It seems we are faced with a government of hypocrites and possible perpetrators of crimes against humanity.  Based on the information coming out of Christmas Island through the Human Rights Commission President Prof. Gillian Triggs we hear that conditions have actually worsened since her last visit, a month ago, for the children and adults being held there.  There has been an increase in the reports of depression, self-harm and bed-wetting amongst the children.  In fact Prof, Triggs says 128 cases have been reported in the last 15 reporting months and was horrified to find that suicide and self-harm were on the rise.

“When we were there, and I can speak very categorically about this, there were 13 women on high-level risk monitoring for suicide, 10 of them requiring 24-hour watch,” Professor Triggs said.

The information coming out of Christmas Island and the reports of refugees being held in open water for weeks at a time with limited access to daylight and fresh water cannot be refuted.  Combine that with ongoing reports from Manus Island and the horror stories coming out of Indonesia and you have a situation that shows that this government is denying basic human rights to children, breaking maritime law, perpetrating racist and insular policies that have no place in modern society and risking condemnation from around the world.

That doesn’t cover the moral risk and the price that the rest of Australia will pay for such unconscionable actions. Groups around the country are bombarding the government and telling them that this can not go on, that Australians won’t allow this to continue in our name but for all intents and purposes the government has chosen to ignore the vast numbers of petitions, the nationwide rallies and the ongoing protests world-wide.  The main-stream media has continued to ignore any marches or rallies against the government and hasn’t reported on the nationwide campaign that saws tens of thousands in every capital city in Australia march in the streets against current LNP policy.

The have ignored an 18.6% swing against them in the seat of Stafford in Qld and have made no comment at a federal level about losing a traditionally conservative seat in the recent bi-election.  Denial seems to be the media mandate handed down by Murdoch and his cronies but the internet is not something that they can gag and despite the desire to ignore [in the hope that we’ll all just shut up and go away] anti-government material by the LNP and their supporters the populace is making it plain that Abbott and his government don’t represent them and don’t represent the future that most want for this country. 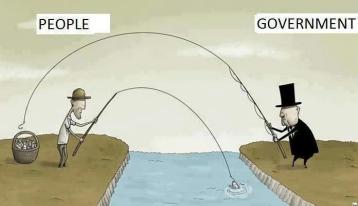 As I said – it’s been an interesting few weeks and I haven’t even really delved too deeply into the very large pile of crap that this government is dropping on the Australian population.  I think I keep waiting for Abbott and Co. to realize how badly they have alienated not just traditional ALP or Green voters but their own grass root supporters.

The fact that they have either failed to recognize or don’t care about the damage they are doing is disturbing since it means that little will stop them unless an election is forced.  Sadly although Abbott promised to call a double dissolution unless the budget was passed we are no closer to seeing an election date at this time.

Well I think that may be enough from me tonight as I don’t want to scare everyone away after all.  I will be back with more updates from Oz as well as getting back into the routine of the Weekend Funny Challenge.  So for now I will bid you good night and good wishes for the weekend.