While the description is a little generalized the intent behind it is utterly correct.  We’ve become a society so concentrated on micro-managing that we lose sight of the bigger problems. Or it may simply be that most feel overwhelmed or unwilling to deal with the larger issues and thus concentrate their efforts where they will make the most noise with the least effort.

Of course I may be a little on the cynical side but I lean toward the second reason as to why so many of those in power prefer not to hear or pretend not to believe that these bigger issues need more attention.

After all it is hard to get elected when what you propose will take long-term planning and probably a long time to see appreciable change. Other issues, smaller and yet somehow more volatile get a lot more coverage especially cloaked in righteousness and ‘family values’.  One would think that feeding families, saving families from conflict and providing families with a habitable planet would fall into that category but obviously some have overlooked and/or deliberately blinded themselves to that. 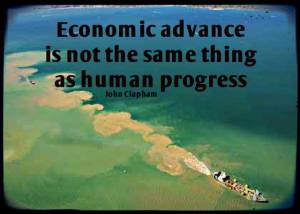 We have managed to combine this blindness with a greed that astonishes me at times and an economic system that measures a countries worth in its financial status rather than the people who live there and the generations to come.

Short term financially based decisions that destroy our ability to provide oxygen, fresh water and a sustainable food source for all will only bring long-term loss in all sectors. From this greed and disregard for humanity springs violence and war. At first by those in power to gain more of what they already have and then by those who have been stripped of everything and are left with the option of simply fading away or fighting to take what they lack. 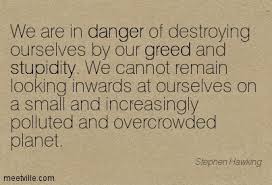 All that death and misery so that those with power can take what little other less developed countries have, deny support and services to those less fortunate in their own countries simply to feed this machine of greed and entitlement.  The tools they use, war or industry, are only the cloaks they wear, to disguise their intent, differ over time.  Religious one-up-man-ship, righteous certainty that their way is the only way, economic growth and employment [once again in the short-term] all of these reasons are only the masks worn to lull the populace into believing that such destruction of life, civil liberties or the environment is needed.

They conduct PR campaigns aimed at convincing the public that those who would oppose these ‘advances’ are troublemakers, instigators, unpatriotic or even just plain crazy and become angry when those same tools are used against them. Crazy for me is valuing money over people, profit over the planet and where gain outweighs the grief [paid by others] that is often the price.

So I will gladly wear the crazy badge and rant, rail and work tirelessly to show that changing the world does not mean drawing every last resource from it until there is nothing but barren rock.  That changing the world is really changing how we live in it and with each other as well as finding the best ways to ensure that future generations have a world to live in. So as the image next to us says – be crazy, be part of the change who knows it may be you who tips the balance. 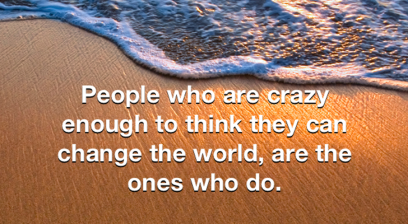 35 thoughts on “Musing on Monday Morning”