First up I would like to thank everyone who sent their good wishes and prayers not just to me but to all those who were in the path of Cyclone Ita.  It meant a great deal and really illustrated just how connected the world can be when we choose.  Things appeared quite bleak on Friday, especially for those in the Far North.

Making the most of it.

Even though there was extensive damage and flooding it appears, in the aftermath, that a great deal was spared major damage and as yet we have no loss of life. There have been injuries including an elderly man who unable to make it back to land was thrown from his boat and spent much of the storm clinging to the wreckage before he was able to crawl ashore.  Towns in the far north took the brunt as it crossed the coastline at Category 4 but by the time it worked its way to Cairns it a deteriorated to Category 2, although the winds and rains were still damaging. But in true Queensland style people were out and about the next day,surveying the damage, assisting in clean-up and skateboarding through flooded streets. 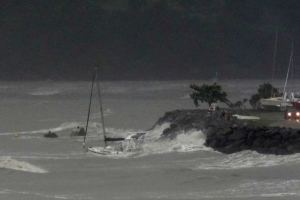 Here in Mackay we expected to deal with the tail winds and rain and the possible flooding once the runoff from the rivers made its way down south. However as nothing ever goes to plan we were in for a little more than we had planned for when the Cyclone reformed and proceeded down the coastline.  Fortunately, despite the wind and rains, it blew itself out over the water and is now breaking up over the Coral Sea.

Farmers further North have been able to assess the damage and for those that were in the direct path it was severe.  Entire crops of sugar cane ready to be harvested were destroyed either by winds or flooding and an indigenous community at Hope Vale close to the coastline lost its entire banana crop as well as many of the buildings in their enclave.  It had taken years to build this property to the point where it would supply enough profit to sustain the community and all who lived on that land and is a great blow to the people there.

Parts of the north are still unable to be accessed without a helicopter and will remain so until the waters recede.  Power and communications have also been destroyed and despite the emergency crews working around the clock it will be some weeks before it is restored to the more remote communities.

As for us, well we still have to wait to see if the flooding from Cairns and Proserpine will force our own waterways to overflow but at present the clean-up is fairly minimal.  My lemon tree and shed have taken a battering as have the new plants I had recently put in.  Apart from that there is very little to do here but others a little further North will need help for the next week or so.  Strangely I think I posted more this weekend than at any other point since I started this venture. It was I think to keep my mind from the fact that Cyclones can do very bad things and having lived through two major ones in the past five years I was not eager to experience a third.

Me yesterday according to my husband

Cabin fever had set in by Sunday as we were all trapped here by wind and rain, so when it turned out that my husband had ‘forgotten’ to buy cigarettes for himself [after I reminded him] and planned on smoking mine I was perhaps a little terse with him.  Oh alright I was guarding my smokes like she-wolf defending her cubs and according to him was just as scary.

In my defense I had not slept in nearly 48 hours and as such was a tad grumpy and not particularly understanding.  However a good nights sleep [well I got 8 hours it’s just that I didn’t go to bed until 3 am] and the world righted itself although I still didn’t feel the need to share my cigarettes. Petty I know but I never said I was overly enlightened with a sense of self-sacrifice, something to work on for the future I guess. Thank you for keeping me company this weekend as it made a tense situation that much more bearable.