This weekend has been divided between waiting to see what happens with Cyclone Ita and an ongoing Australian comedy theme for the Challenge. Well it appears that I have some time on my hands as we are still waiting to find out if the storm will reform or not and how long we have to put up with this wind and rain.

Honestly it’s been going on long enough that I’m considering purchasing an Ark. The only thing holding me back is the idea of the 2 of every kind of animal catching a ride with us. 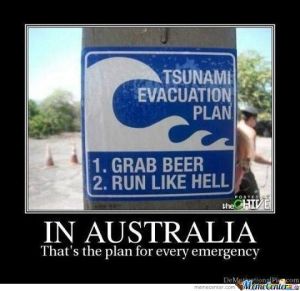 I mean as blase as I am about our native wildlife there are limits. So I thought I would add to the weekend fun with some humorous looks at living in Australia and just what our plan for trouble is and our priorities when preparing.

Of course in every good plan there are flaws, not to mention things overlooked and it is then that the Aussie ingenuity is put to the test to make sure that all the basics needed to survive during a crisis are available.

Did not want to get left behind.

After a crisis is past everyone joins in to help or rescue those left in dire straights.  Of course there are times when the rescuers need rescuing from those determined not to be left behind.  Personally I’d have run for it myself but they left it to late and now if they try to go up they’ll just be dragged down.  This crocodile from the Cape had to be tranked before it let go of the copter.  [another rescue mission up North from a previous storm, this one is still hanging around and it’s not calm enough yet for aircraft]

Of course once it does settle they’ll be up trying to get an overview of what the damage is.  There will also be those rough and tumble salvage types who go out on the water as soon as possible to check for wrecked or damaged boats.  They’ll claim either the cost of towing them in or if far enough out whatever they were carrying.  These guys are seriously tough as this Great White found out when it tried to take a bite. 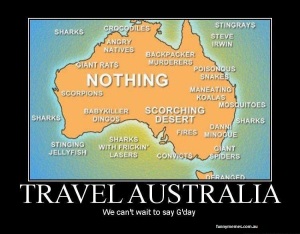 Last but not least I will leave you with this little map of Australia that was put together by an American living here.  It’s designed for travelers from the US and is one of the funniest things I’ve seen of this type simply because of the brutal honesty in how it is labelled.

19 thoughts on “Passing the Time with Some Laughs”